The ReGenPod compared to Cold Lasers

The first FDA clearance was issued for a cold laser in 2004 and they were widely used outside of US for decades before they became popular in the US. There are lots of manufacturers making great cold lasers and most professional lasers are cleared for use in treating pain, increasing blood flow and reducing inflammation. The development of higher quality whole-body PhotoBioModulation (PBM) devices is a logical extension of the cold laser market.

For many years, cold laser practitioners have been saying that they need a hand-free and safer way to apply larger doses of light to their users, like a class-4 laser system but in a way that has less risk of eye damage and is safe enough to do unattended (to reduce the cost). In the cold lasers world, there are 6 basic concept of what makes a PBM device a great system.

When you look at the world of cold lasers systems, it is easy to see that the best systems typically give users more power, programmability and flexibility. The ReGenPod solves all the typical cold laser problems by combining 4 independently controlled wavelengths that can be turned off, turned on in a continuous wave (CW) or pulsed at any frequency between 6Hz and 6000Hz. The multi-step programs allow users the maximum flexibility to include multiple steps with different pulsing frequencies in one program and the user tracking system ensures that the system is constantly improving. The following table shows how the ReGen Pod stacks up against traditional therapy lasers.

*Part of the requirement for FDA clearance of a laser based on product code: ILY is based on testing the system to show that it will maintain the skin temperature at 40° - 45°C in a standard 10-minute test. This test does not specify a distance between the light source and the skin and this distance has a huge impact on the skin temperature. To pass this test with Class-4 lasers, they space the laser at a distance away from the skin to maintain a consistent temperature in this range. Unfortunately, most lasers are not used at the "test" distance so higher power systems be kept moving or the skin must be cooled to avoid excess temperatures. The potential for overheating can be much worst if the test subject has darker skin. Using a device with a lower power density like the ReGen Pod eliminates the chances of exceeding 45°C.. 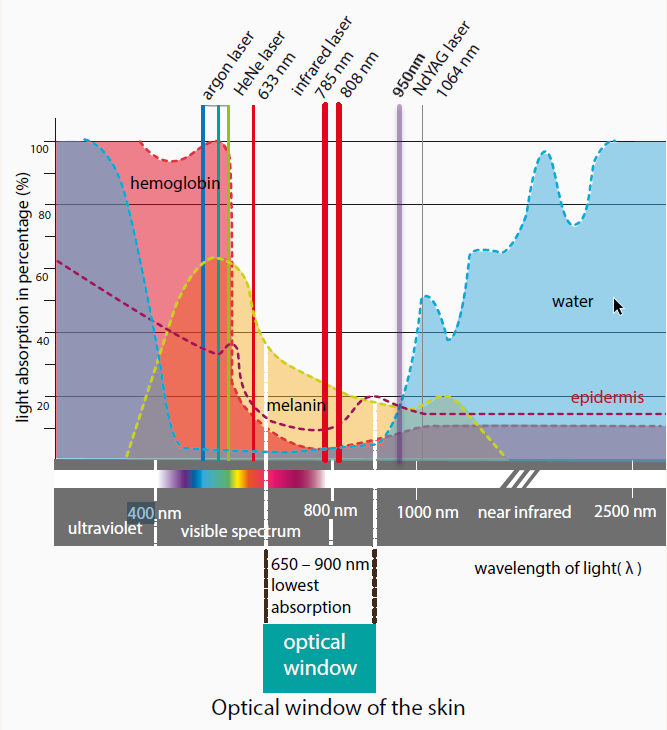 Much of the theory for cold lasers and PBM is based on which wavelengths can travel through tissue most efficiently and stimulating the release of adenosine triphosphate (ATP) from the mitochondria. There has been a lot of research in this area and some of the research can be summarize in a graph showing the optical window (left graph). This graph is republished from the book Laser Field Therapy by Anja Fuchtenbush, Volmar Kriesel and Peter Rosen. This group has published many of the most complete resources in laser therapy and we have a lot of respect for these PBMT leaders. In this graph, we can see that the optical window (also called the therapeutic window) is the range of wavelengths that provide the best depth of penetration AND the desired reaction with the mitochondira. I added the purple line to show the transition frequency where water starts to become the dominant photonic interaction. In this graph, we can see that some wavelengths are much better at traveling through tissue and other are absorbed with less benefit. As we approach the lower end of the wavelength graph, we see that more of the energy is absorbed by melanin and then hemoglobin in the blood. As we approach the higher end, we see that water is absorbing much of the energy. Any energy that is absorbed by water can not be converted in to chemical energy. As we see in the graph, higher wavelengths can result in up to 100% of the energy being absorbed by the water in tissue. This is not PBM, this is a thermal process that has some benefit by increasing circulation and dialating bood vessels. In some cases, this is desired but it is not a photo-chemical reaction like we are typically wanting in PBM. The design of the ReGen Pod is based on the optical window and our pod uses carefully selected wavelengths that provide wavelength diversity while properly balancing the absorption and photochemical response that we want from PBMT. We strategically avoided any "trendy", exotic or unproven wavelengths that some manufacturers use to make their product more unique. If you want a system based on alternate wavelengths, we will custom build one for you.

This graph clearly illustrates that 650nm to 900 nm is the recommend wavelength for PBMT because it minimized undesired absorption and that wavelengths like 808/810nm are a great option for deep penetration PBMT applications. Many cold laser companies offer other wavelengths to supplement this wavelength but 810nm is one of the most common in the world of cold lasers. The table below shows some the the market leaders in laser therapy and which wavelengths, they use. Also, in publications from Dr. Morris and Dr. Hamblin, 800nm to 860nm is discussed as one of the best wavelength because it produces a great balance between depth of penetration and the strongest interaction with the mitochondria. Here is more published research analyzing different wavelengths. The ReGen Pod combines 810nm and lower cost 850nm diodes to provide a good balance between optimizing the wavelength and managing the cost. Here is a table of some of the leaders in the cold laser market.

In the graph above, we also see that 940nm can be a good choice because it is before the rapid slope increase where the energy is mainly absorbed by water in human tissue. By staying at 940nm and below, we get wavelength diversity while avoid wasting energy that would be absorbed by water in a thermal reaction and not a chemical reaction. At 940nm, we feel the ReGen Pod give users the maximum flexibility to match the performance of High Intensity Laser Therapy (HILT) class-4 systems and our system avoids the lower efficiency wavelengths above 940nm illustrated in the graph.

In the cosmetic industry, the requirements are very different . For this market, device designers use 600nm to 660nm as the primary wavelength because they want to maximize how much of the energy is absorbed by the melanin close to the surface of the skin. In general, red light systems are best know for for treating acne, rashes, wrinkles, and other superficial issues. In fact, you will find most cosmetic devices on Amazon are based on red LEDs. Even though it is not a good primary wavelength, Red is can be a good secondary wavelength in the cold laser market. There are several cold laser companies that work primarily in the 600nm to 660nm range. Both Biolight and Erchonia use 633/630nm as a primary wavelength. These companies are unique because they do low dosages and put the emphasis on the pulsing. If pulsing is the key to success in some programs, then pulsing visible red light (600nm to 680nm) is probably the best wavelength for these applications. When designing the ReGen Pod, we wanted to give users maximum flexibility so we included 633nm and gave users total control over the pulsing of each wavelength.

As the non-profit Skin Cancer Foundation says on their website, " it was once thought that only UVB was of concern, but we keep learning more and more about the damage caused by UVA." . In the published research: "Low-level laser (light) therapy (LLLT) in skin: stimulating, healing, restoring" by Pinar Avci, MD, Asheesh Gupta, PhD, Magesh Sadasivam, MTech, Daniela Vecchio, PhD, Zeev Pam, MD, Nadav Pam, MD, and Michael R Hamblin, PhD - 2014, they state "It is widely accepted that the UV range (< 400 nm) exposure is responsible for almost all damaging photo-induced effects on human skin." In case you need more info, The Journal of Biological Chemistry published "Blue light induces mitochondrial DNA damage and free radical production in epithelial cells ." by Bernard Godley, Farrukh Shamsi, Fong-Qi Liang, stuart Jarrett, Sallyanne Davies and Mike Boulton. Since the underlying concept of PBM is to push light into the mMitochondia, blue light seems like a bad choice. Although there have been some positive studies associated with blue wavelengths of light, we do NOT include blue wavelengths in the ReGen Pod because of the possible health risks.

There are some therapy laser manufacturers that use higher wavelengths claiming among other things that a bigger number is always better. Some of these system seem to exist because the diodes are cheap since they are used in other applications (like surgical laser). As seen in the graph above, wavelengths above 950nm are great at heating water. In the published paper The 980-nm diode laser for brain surgery: histopathology and recovery period by Ozguncem Bozkulak, Hasim Ozgur Tabakoglu, Ayla Aksoy,Ozlem Kurtkaya, Aydin Sav, Resit Canbeyli and Murat Gulsoy, the first sentence in the publication is "The 980-nm diode laser has been under investigation for neurosurgery because of a local peak in the absorption spectra of water around this wavelength." Although generalized heating has some health benefits like increased circulation, any energy that is converted into heat (in the water molucules) is not turned into chemical energy. For these reasons, we avoid using wavelengths above 950nm for PBMT but we invite you to do your own research. 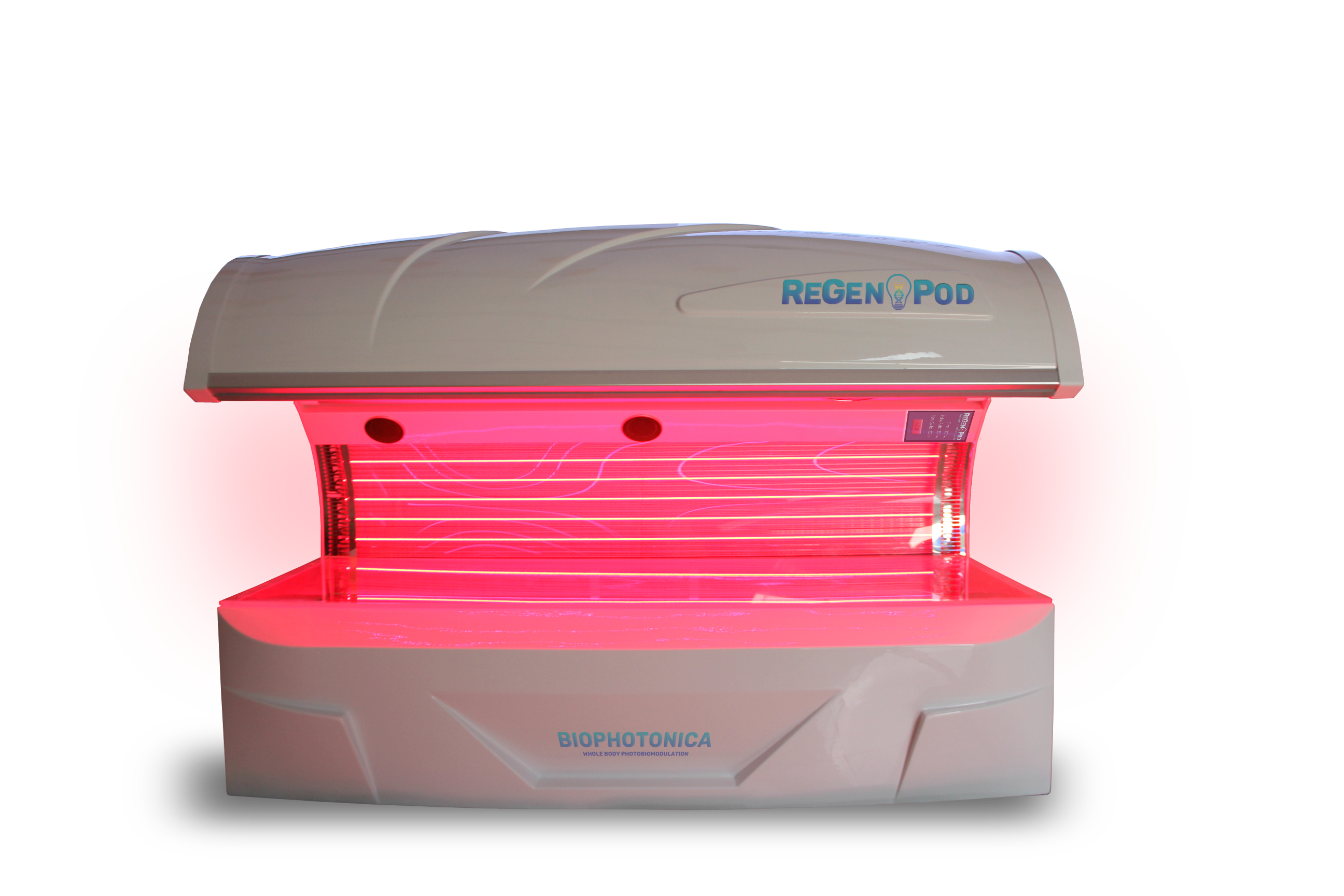 As you can see in the chart, the ReGenPod beats lasers in almost every case. For more information call 1-800-771-2176