Why is the ReGen Q8 the absolute best? 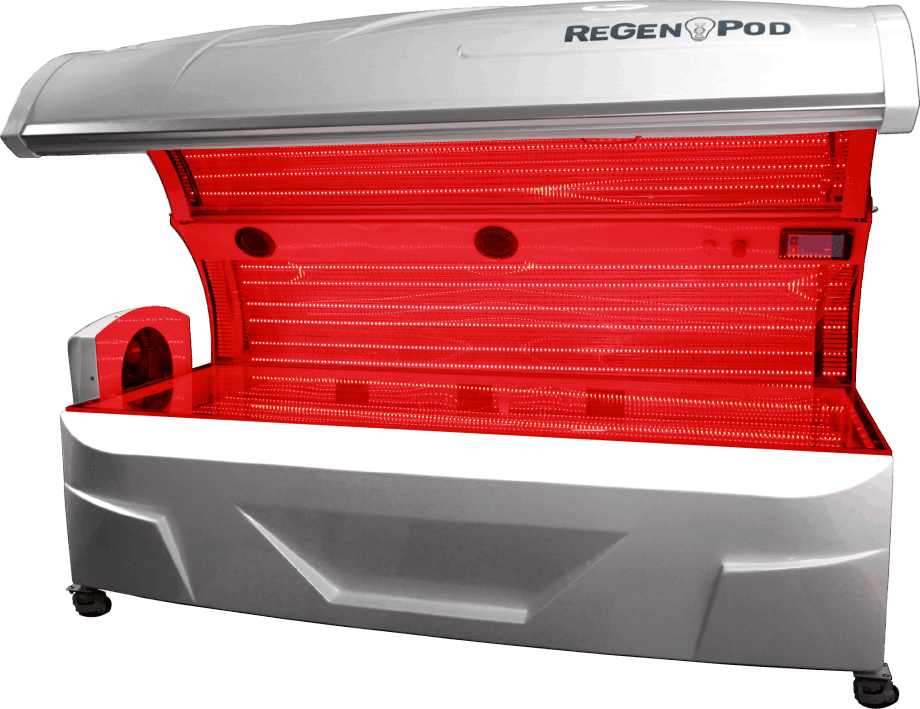 What makes the ultimate pod?

In general, people are interested in PBM pods because they want the highest dosage in the shorted time. Higher dosages wow users by giving them results in a few sessions that might take 10 to 20 sessions in a lower dosage system. Honestly, most people don't have that kind of patience, especially if they are new to the technology and weary that might not work. The Q8 was created to solve this problem. and show fastest results. With 360° of high-intensity our pod is best at triggering a photochemical reaction in the Mitochondria to release Adenosine Triphosphate (ATP). With 7.6 million milliwatts (7600w) of continuous wave power (most PBM devices are specified in milliwatts), the ReGen Pod makes delivers appropriate dosages evenly distributed over the entire body in the fastest time. We have tested all the option and we can prove to you that the ReGen Q8 has the highest light density of any system.

We already know from years of laser therapy research that each wavelength has a different applications where they are appropriate and that some diode are much more expensive than others. Many pods use the lowest cost diodes to increase profits and some companies choose wavelength to get the maximum efficacy. The Q8 uses the highest efficiency and highest efficacy diodes that we are currently available. We use a custom combination of red and infrared wavelengths (630nm, 810nm, 850nm, and 940nm) optimized for PBM and not cosmetics or marketing purposes. If you want blue, green, yellow, and purple lights, go to the disco. If you want a photo-chemical reaction, our blend of red and infrared wavelengths is based on the best practices and most established research in PBMT.

Historically, we see that some problems are solved with dosage and some problems are solved with pulsing. A good system does both. As a tool to help the most people, the ReGen Pod was created to give users easy access to decades of research in pulsing and protocol developments. Because each wavelength is individually controlled. users can produce complex light fields inside the pod based the research for Fuchtenbusch, Weber and many of the other leaders in the field. The system has a huge library of classical and cutting edge pulsing presets. These presets are built into protocols and are then assigned to users to meet their personal needs. The factory library includes hundred of preset and protocols and that number is constantly growing (automatically updated to every pod on the field). Owner can also copy and edit the factory protocols or just create them from scratch in just a few clicks. Users can combine unlimited pulsing steps into a protocol to push the limits of pulsing to the max.

PBM alone can provide incredible results but we did not let that stop us from additional modalities on top of the PBM. This is called stacking and not one does it better than BioPhotonica. The Q8 is built with high quality Rockford Fosgate speakers and audio amp that talks to the main pod controller. This allows users inside the pod to have multiple audio options. 1. Users can attach their phone to the bluetooth speakers (and adjust the volume on the Pod touchscreen). 2. Users can also select a custom audio track from the drop down list on the internal touchscreen. This list includes audio track to reduce anxiety, focus better on healing or increase performance. 3. Best of all, some protocols include a synchronized audio track that pulses the sound and light together. This allow the Q8 to replicate some amazing research including the Alzheimer's study that showed positive results using 40Hz light and sound. Because the Q8 is cloud connected, the list of custom audio tracks is always getting better. We feel that focusing on healing while experiencing the intense boost you get from ReGen Pod should provide better results and make users happier.

For anyone using a pod in a business, the user experience is the key to success. A great PBM system allows for a premium user experience without overhead. That is exactly what the Q8 does. The flat base is easy to enter and exit. The high curved top makes the system less claustrophobic. The kiosk allows allows users to choose from a huge variety of protocols that are only for them. Every time they use the pod, they can choose from a list of protocols with easy to understand names that meet all their individual needs. This produces a premium experience that builds a strong bond to users and keeps them coming back. It is a radically better customer experience that you get with old-tech timer only systems or require the user to set individual variables to guess what would provide the highest efficacy for them.

The Best Keeps Getting Better

Unlike low-quality hardware-based technologies that are obsolete the day it is installed, the ReGen Pod is cloud-connected and software Configurable so the ReGen Pod is get better and better every day. Our architecture is built from the ground up to give users control to set every variable to customize the Pod for their needs. Because the system is WiFi connected, it can constant evolve, Our system allows for over-night software upgrades, remote pushing of new protocols, remote diagnostics from the factory and unlimited customization. As the pod market evolves, the ReGen Pod will evolve too. The ReGen Pod is already the best pod on the market and it get better and better every day. Comparing the ReGen Pod Q8 to other system is like comparing the upgradability of a Tesla™ to a Ford™ model T.

Our Software and mobile application make it easy for anyone to maximize their ReGen experience. Managing users, adjusting protocols, monitoring the system, get additional training and so much more. The more you use your pod, the better it gets. As your pod builds history, you can see which protocols are the most popular, which users are getting in the most sessions and how the machine is performing. Finally, there is a machine designed to help you grow your business and help as many people as possible. 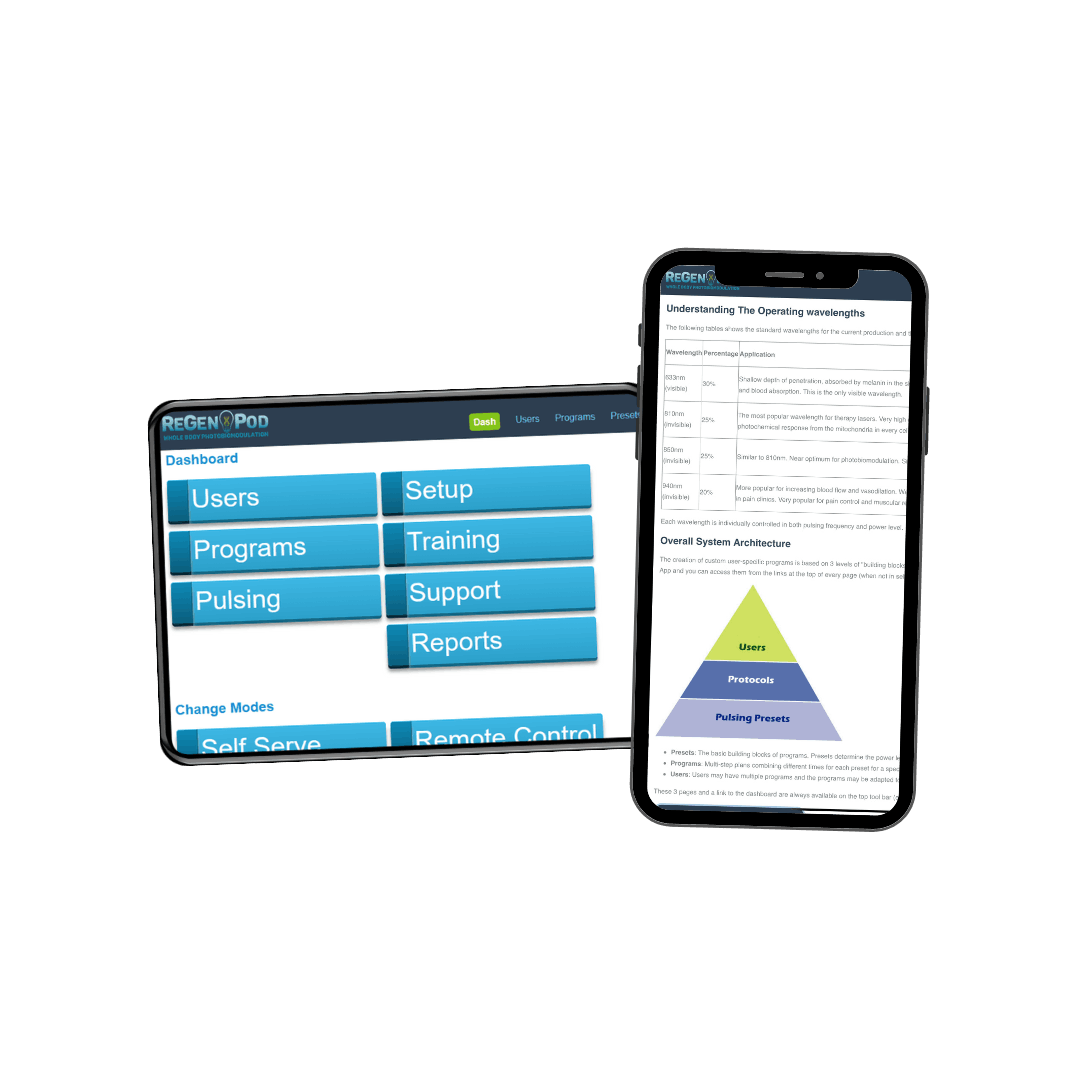 We understand purchasing a Pod is a large investment and can be overwhelming to think about setting it up. That's why we never outsource the installation and setup of your system. We use the same team for each system to guarantee the quality you deserve. 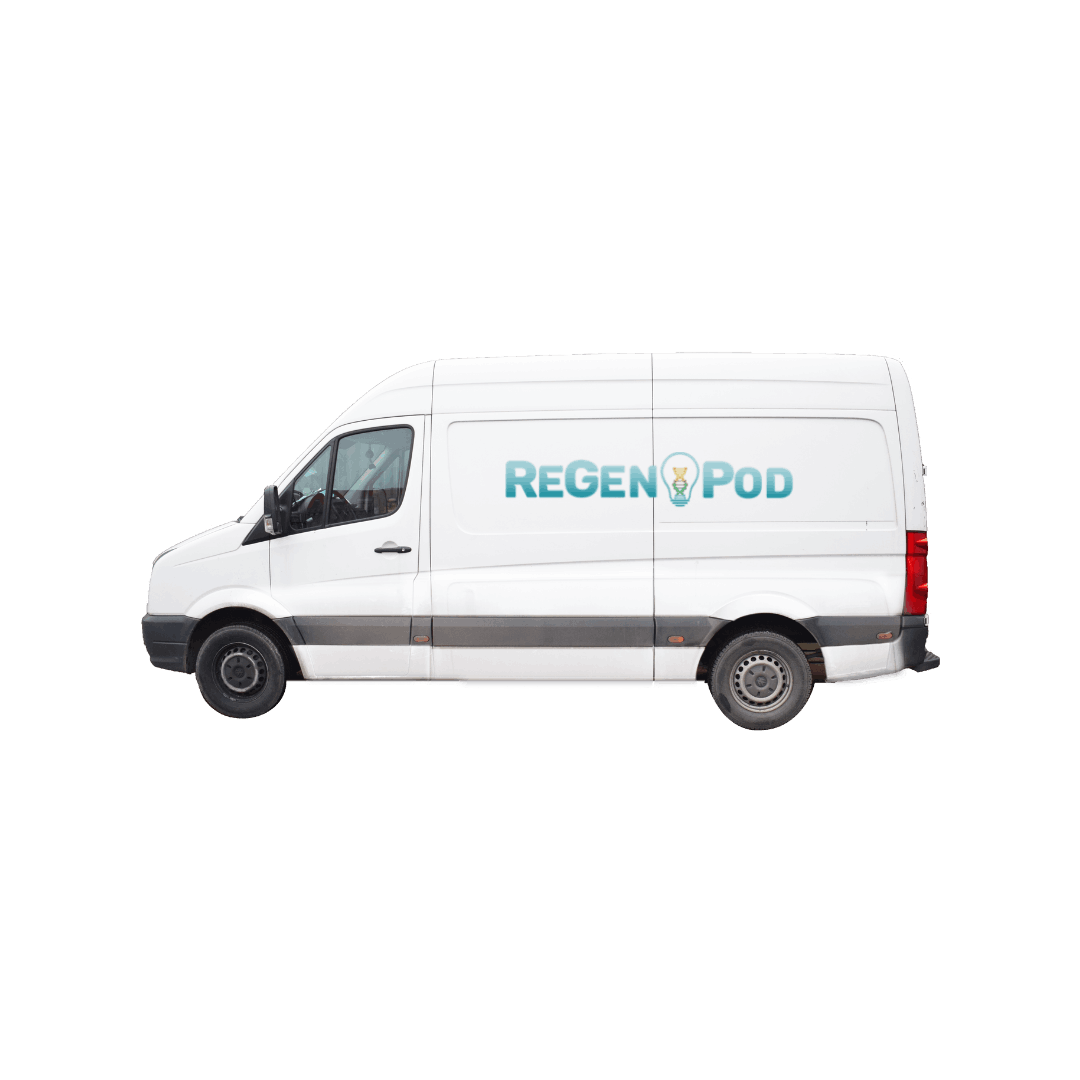 From training manuals to the human support you need, we will train you and your staff in daily pod operation, help master the software, and provide support whenever you need it. From post-installation in-depth training to any inquiries you may have in the future, we will come to you in person or provide remote support. 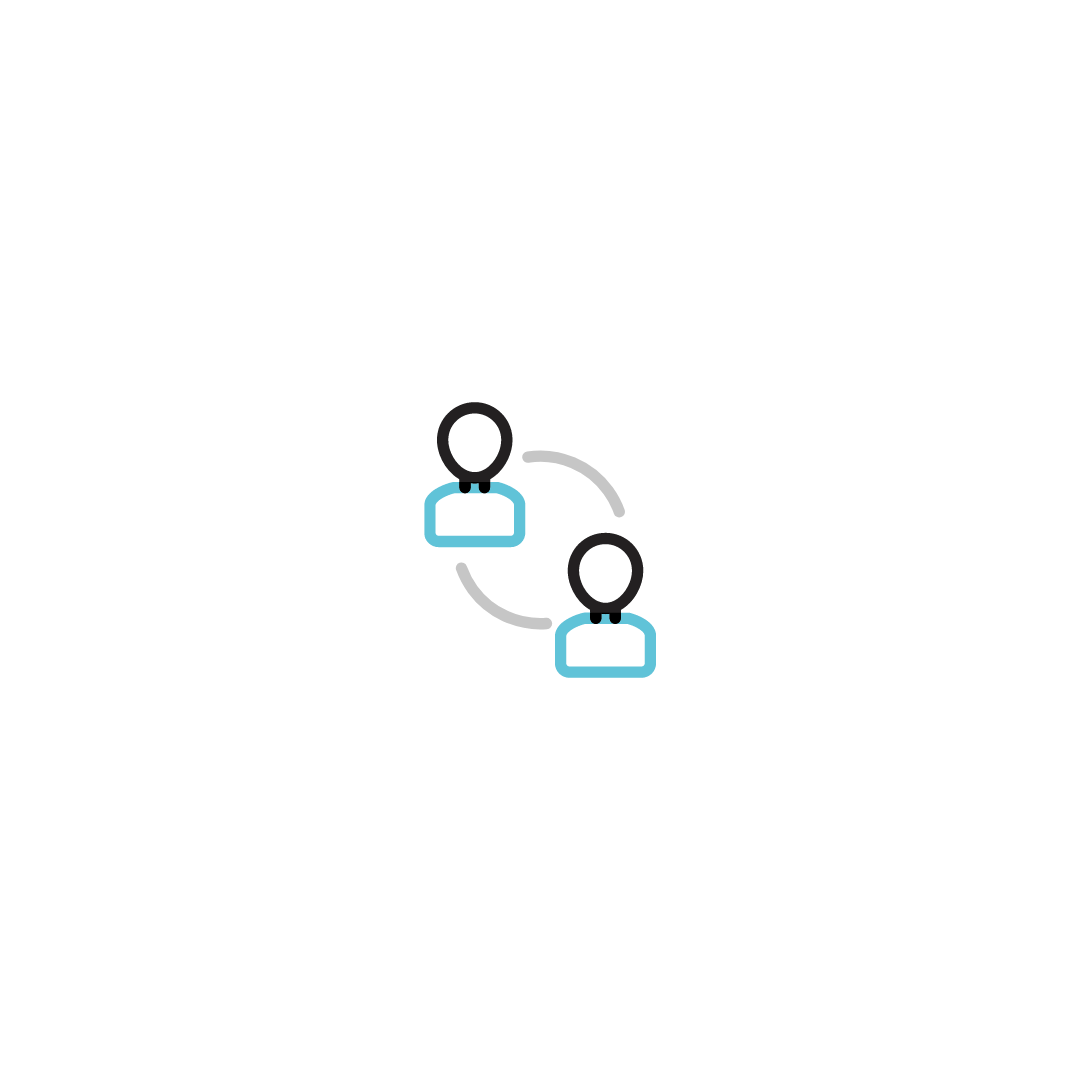 The ReGen Pod Q8 costs about 27 cents per session to operate. Because the ReGen Pod features a rich customer-focused experience through our kiosk and huge library of custom protocols, it can keep your customers happy and engaged with minimal or no staff required. There are very few other options that offer this level of customer experience with such little overhead. 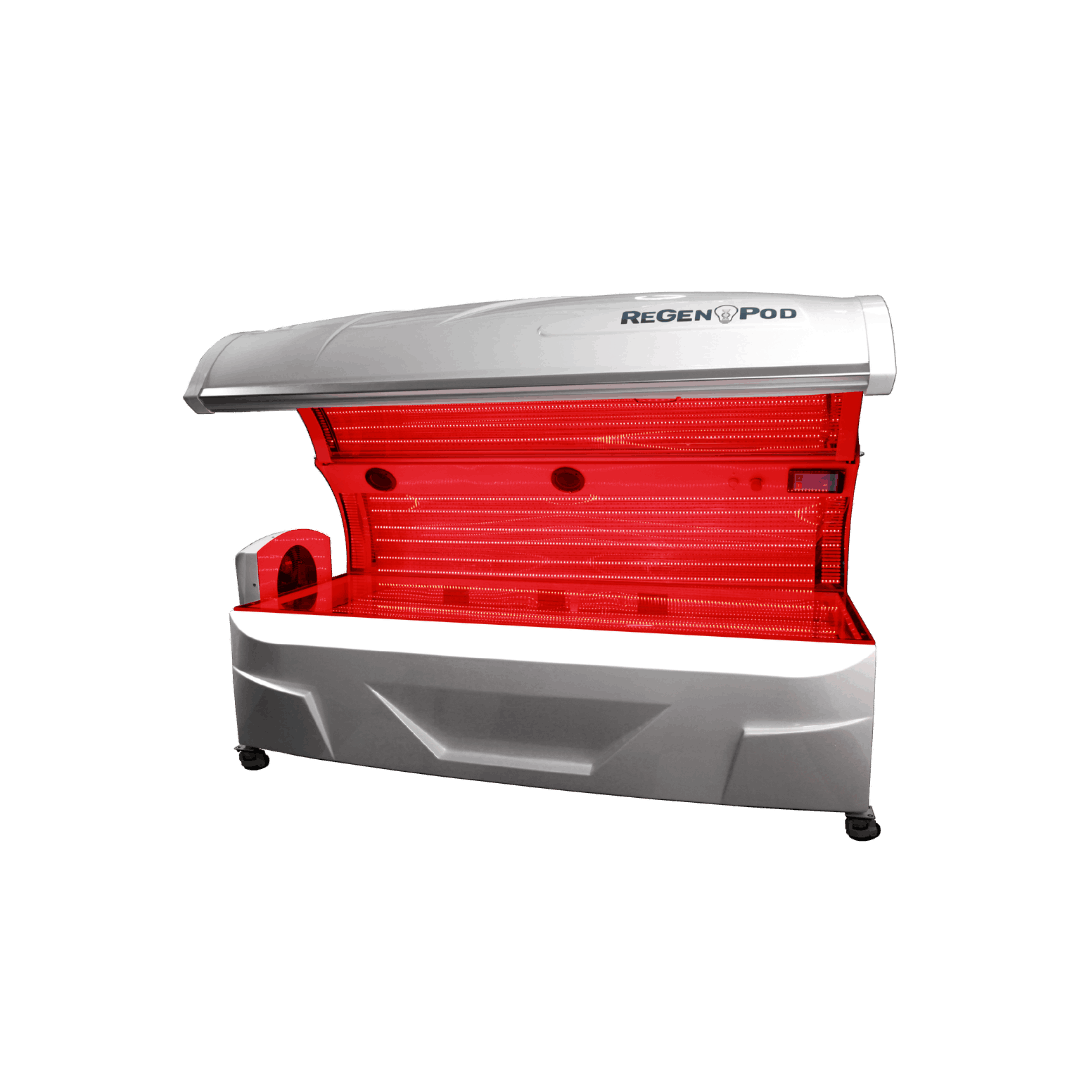 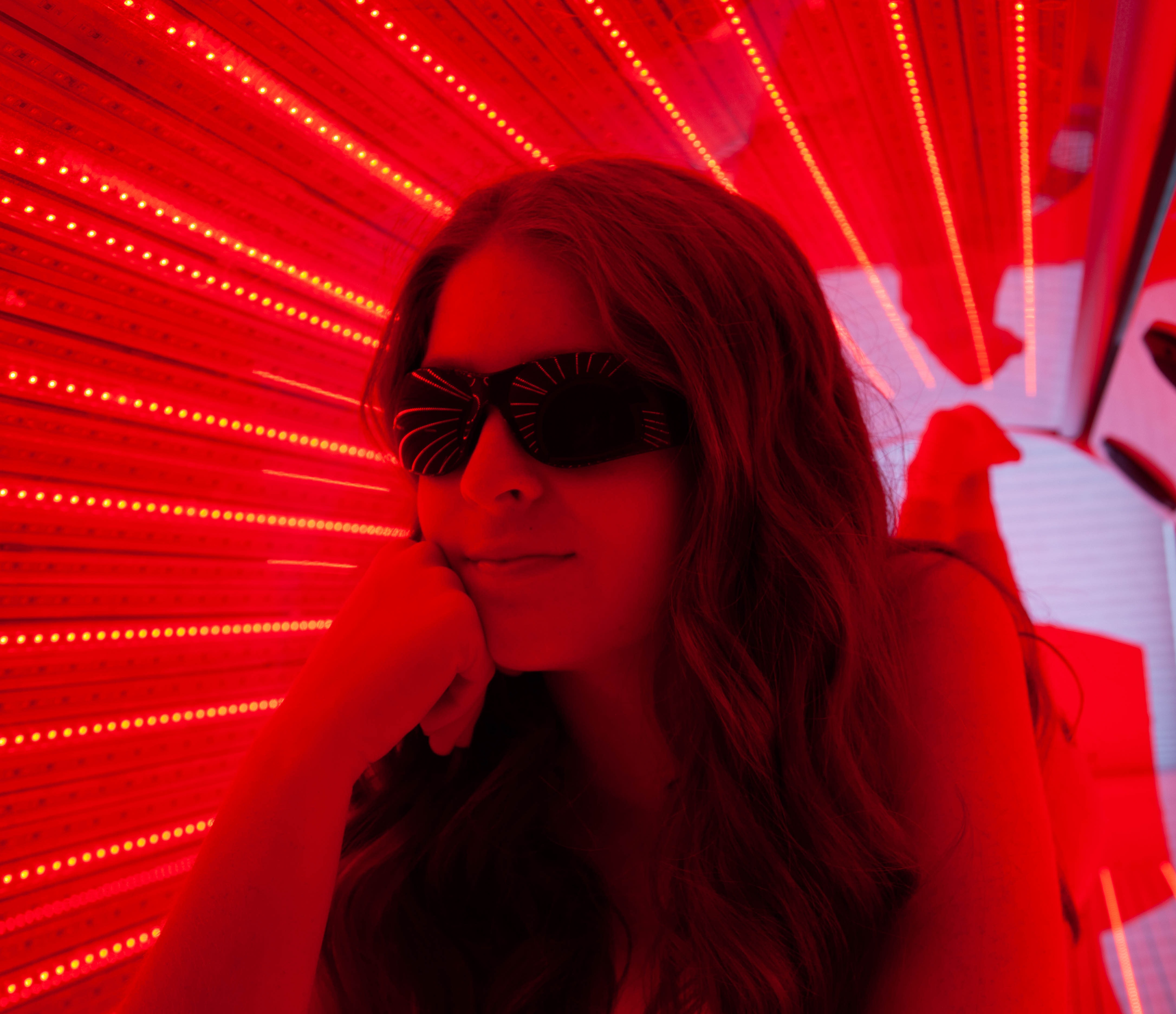 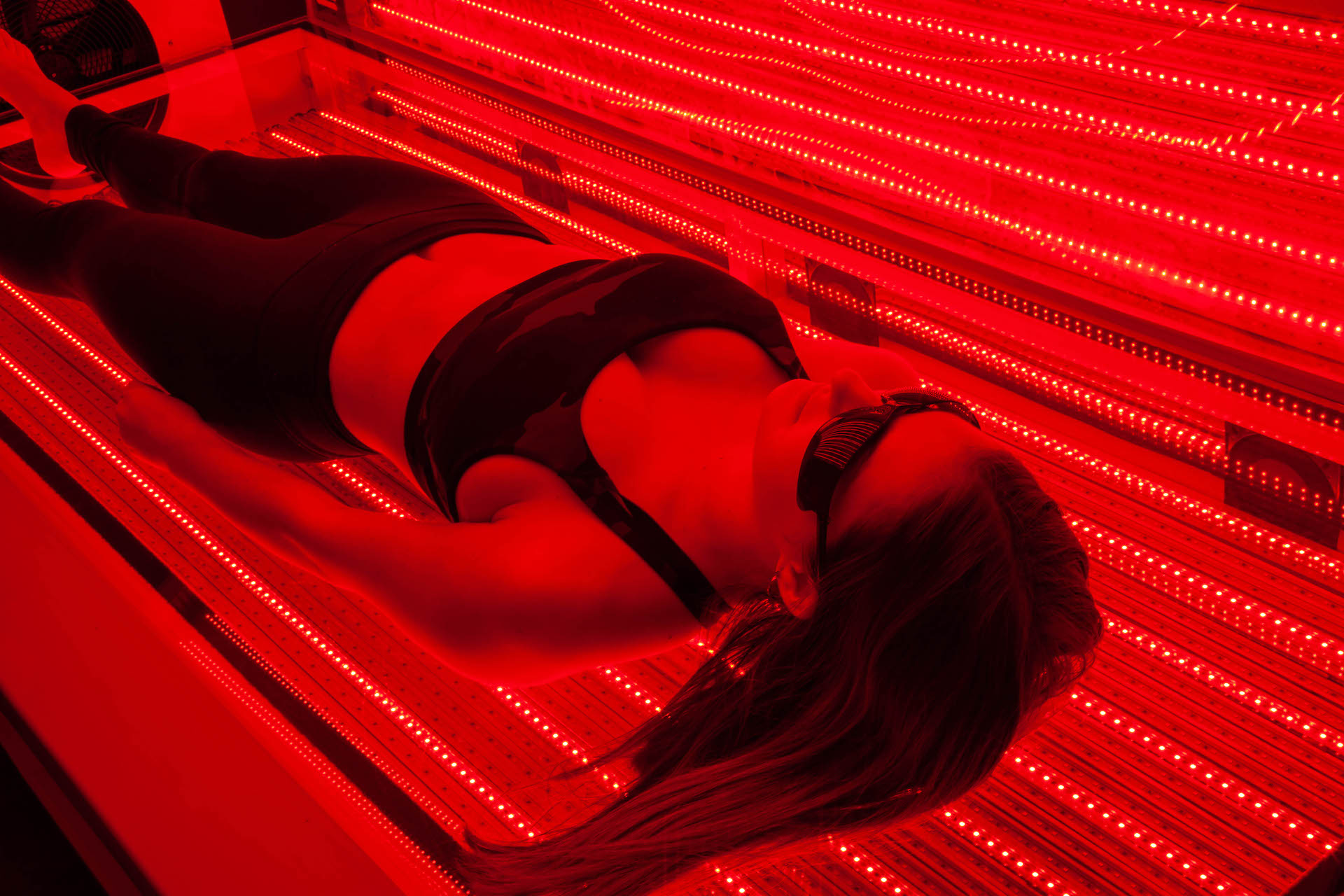 Stay informed for updates, news, promotions and much more!

How often should I be using the ReGen Pod?

Like Anything, frequency of use is different for each individual. For first time users we recommend 3 times a week on average. For those who have more serious and urgent health issues, once a day will provide the maximum benefit.

Where can I find supporting studies for PBMT?

You should refer to our Blog & Research Page. Here we have highlighted blog posts as well as one of the largest data bases for studies in relation to all things PBMT.

What is the difference between UV & Red Light?

Most people are familiar with tanning beds that use UV light to darken the skin and to release vitamin D. This wavelength of light is also well known for its ability to cause skin damage, accelerate aging and help cancer grow. This is why the American cancer association recommends sunscreen to block this portion of the sun's spectrum. Although it has some positive applications, humans should avoid this wavelength in general.

The ReGen Pod avoids these wavelengths and uses both Red (637nm) and Near Infra-Red (NIR). Red is the wavelength used for most cosmetic applications, but it is also commonly used for therapeutics including wound management, dermatitis, and collagen production. It is also nice that it is visible so you can see when a therapy device is turned on.
Invisible NIR light, especially at 810 nm, has the best depth of penetration in tissue of any wavelength. This energy is within the "therapeutic window" so it is very efficient at being driven deep into the tissue where is forms a photo-chemical reaction (not a photo-thermal reaction). We also use 850nm and 940nm as they are within the "therapeutic window" and add some wavelength diversity.

Infra-Red light (starting around 950 nm) light is commonly used in surgical lasers because it is rapidly turned into thermal energy (heat) that can be used to cut tissue. Any photons that are converted into thermal energy cannot be converted into chemical energy, which is what we really want. Most Saunas operate above 950 nm so they are really heaters and not PhotoBioModulation (PBM) devices.

What are the main benefits I should receive?

PBMT is FDA registered as an inflammation control device so this will be the primary benefit received. That being said, shorter recovery times, reduction in pain, increases in energy, and improved sleep are some of the main benefits you should expect to see.

When should I feel the results?

There are short and long term results we achieve when using the ReGen Pod. Following your appointment it is common to receive a boost in energy and mood, this can be as immediate as 5 minutes after your treatment. Longer term results like pain reduction and inflammation control are most often achieved after using the device 3-6 times.

How can I better educate myself on this topic?

Our Blog & Research section of our site as well as online videos can be great sources of information when learning about Photobiomodulation. We are also more than happy to speak over the phone and in person about any questions you may have regarding PBMT.